We were asked to design and build a set for Facebook Select 2020 – a series of events and talks on how to get the most out of Facebook for businesses.

We were given a fairly open brief – to create portable set pieces to deck out several areas in the Facebook Rathbone Square offices that would look impressive but not distract from the speakers. They also had to change from one event to the next, yet still maintain a cohesive overall look. 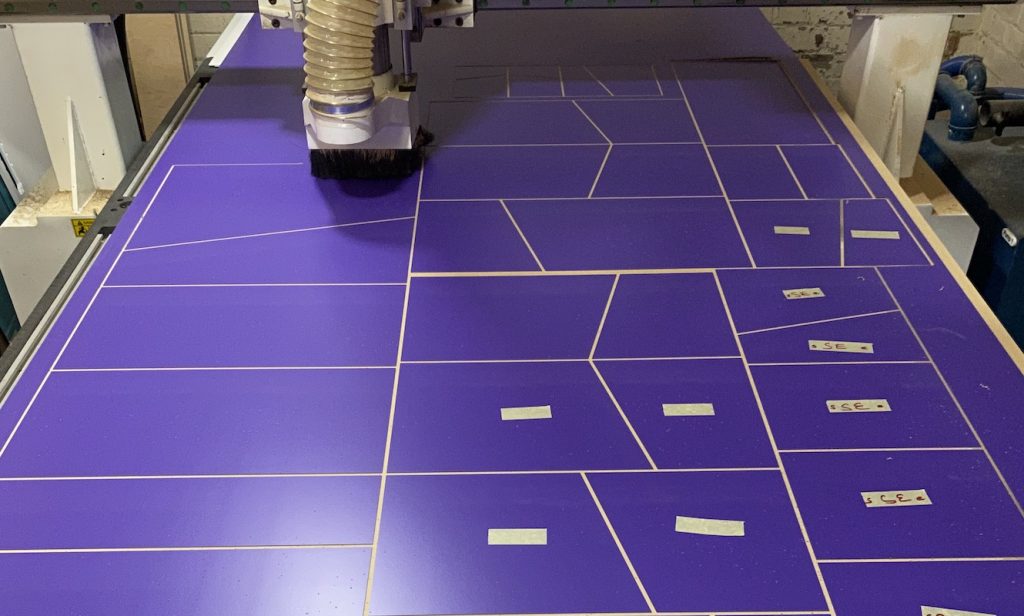 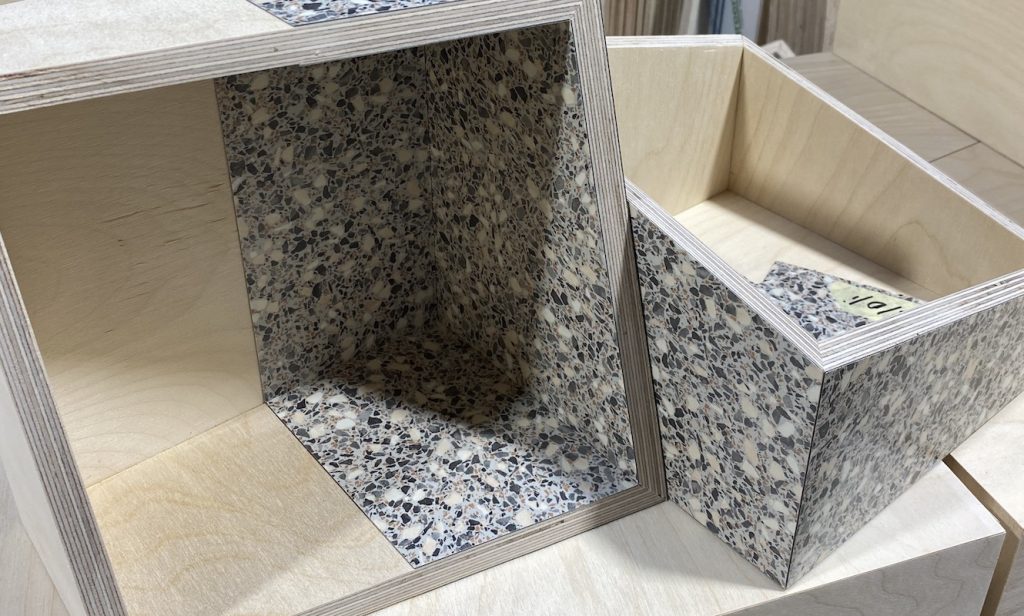 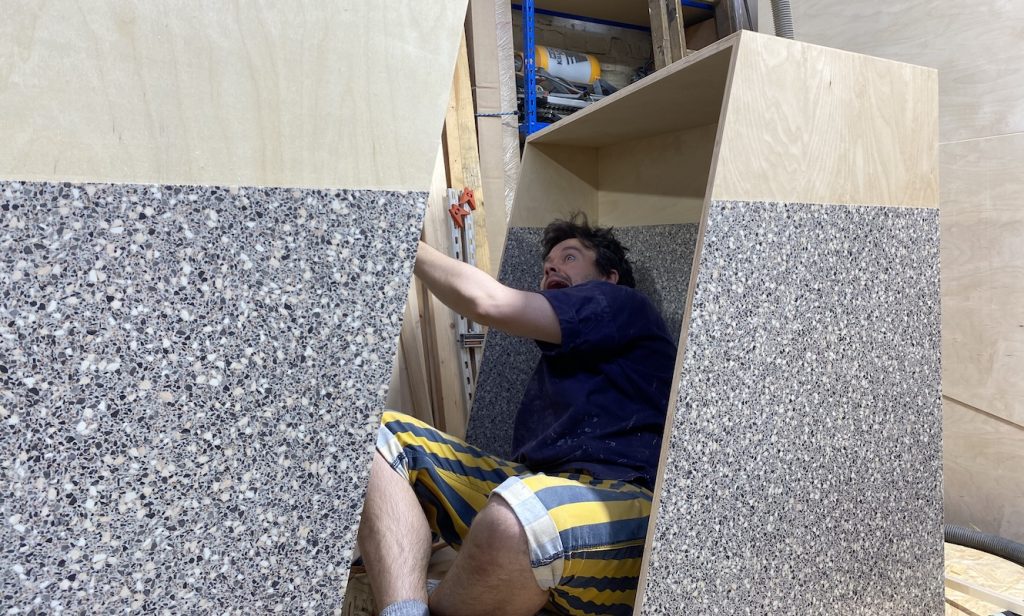 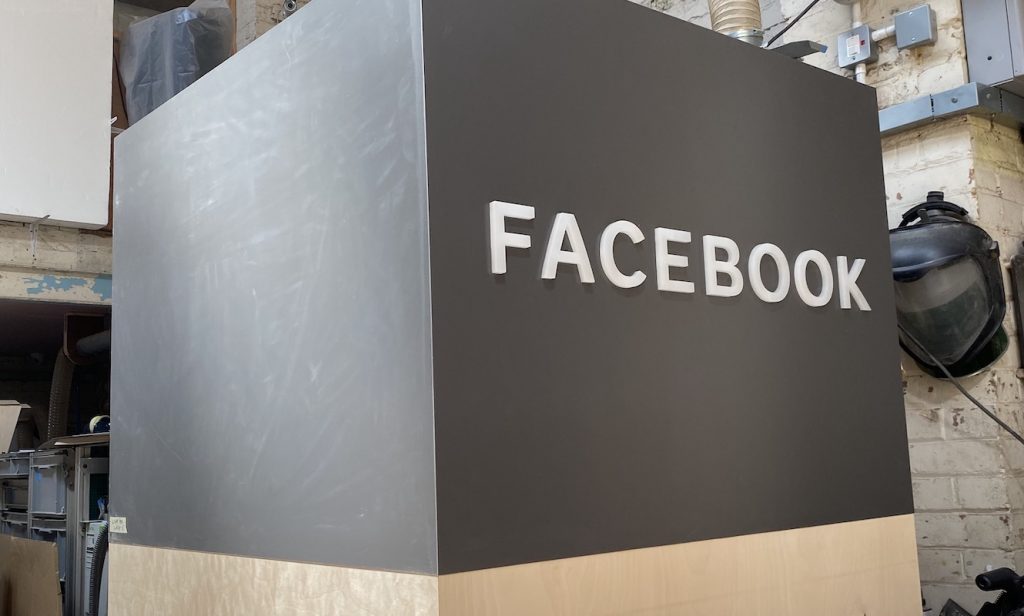 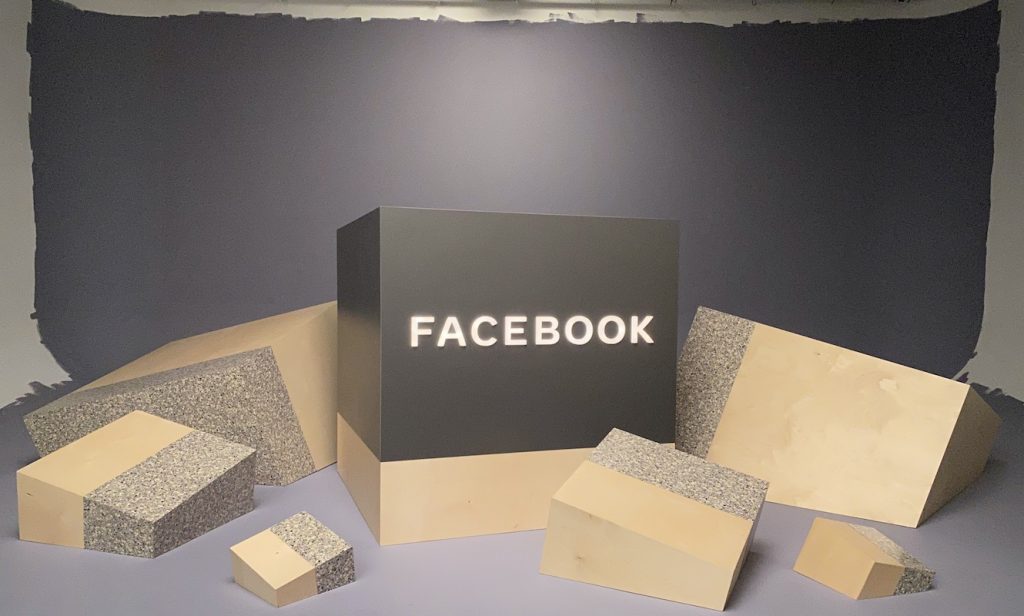 We went through many design iterations but the basic concept was the same throughout. We would make three sizes of cube with a colour change for each event and a variety of stacking formations. Our final design was birch ply cubes – either whole, or split into halves at an angle, with interchangeable laminate panels. There were 5 variations on the laminate banding which allowed for a huge range of possible visual arrangements.

We chose a core palette of birch ply, dark grey, and a pale grey/orange terrazzo as a playful nod to traditional corporate office design. Each event had a core colour so we matched our laminate to the palette chosen by Facebook and set about building a vast city of cubes.

The idea was to have 1m cubes as a base with 1/2m and 1/4m cubes stacked in various formations to create dynamic arrangements within the event spaces. The smaller cubes could nest within the larger split cubes to cut emissions when transporting them. The nesting also optimised storage space in between sessions. There were also 4 light-boxes made with the Facebook logo to act as focal points within the various spaces.

We designed a different style of arrangement for each event, beginning with the split cubes ’emerging’ out of the ground for the opening event and ending with a regular, solid wall of whole cubes for the last event. The concept was that the set built-up and solidified across the talks, alongside the participants’ knowledge.

Spanner in the works

Then… along came a global pandemic. The large, in-person events we had been preparing for were all cancelled. The series moved online, with speakers appearing over Zoom and talks filmed in small studios for video on demand. That is where the design truly came into its own. The nesting nature of the cubes meant that we could easily deliver several 1/2m and 1/4m cubes to the speakers’ homes. They could then set up their own personal arrangements to appear in the background of their videos.

Thanks to the success of our ‘Home set-piece delivery service’, we were subsequently asked to provide portable kits for the Facebook Select events taking place in Germany and Sweden.

We had a quick redesign, scaling the cubes down so that all three sizes would work in a domestic setting. We also created a magnetic fixing system so it would be quick and simple for the speakers to swap out the colours for each event. The cubes and steel colour panels all packed down perfectly into a standard flight-case that could be easily and safely transported between locations.

The cubes were so popular that we were asked to make small personalised versions for the participants as keepsakes. 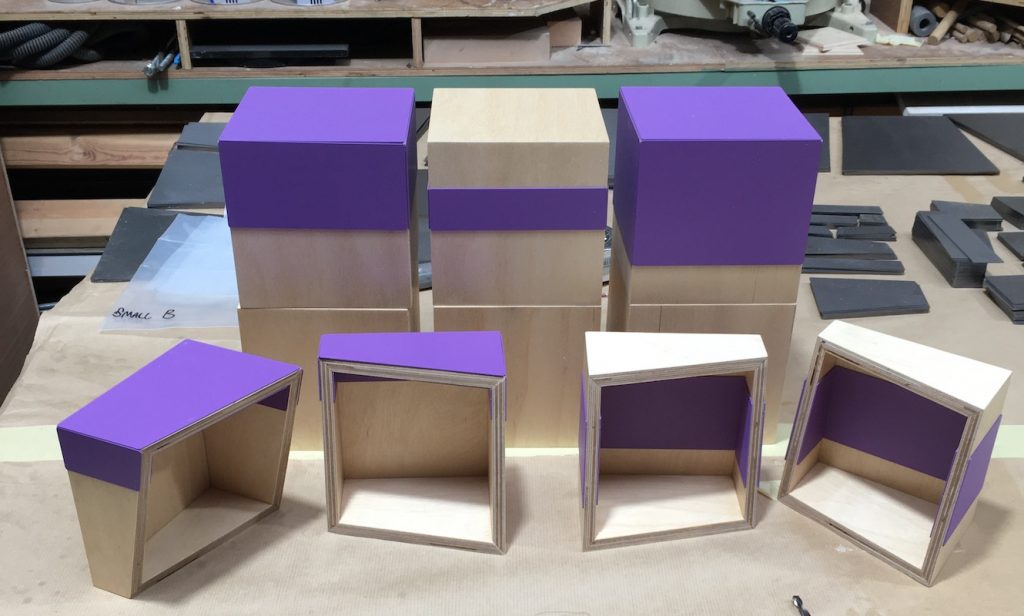 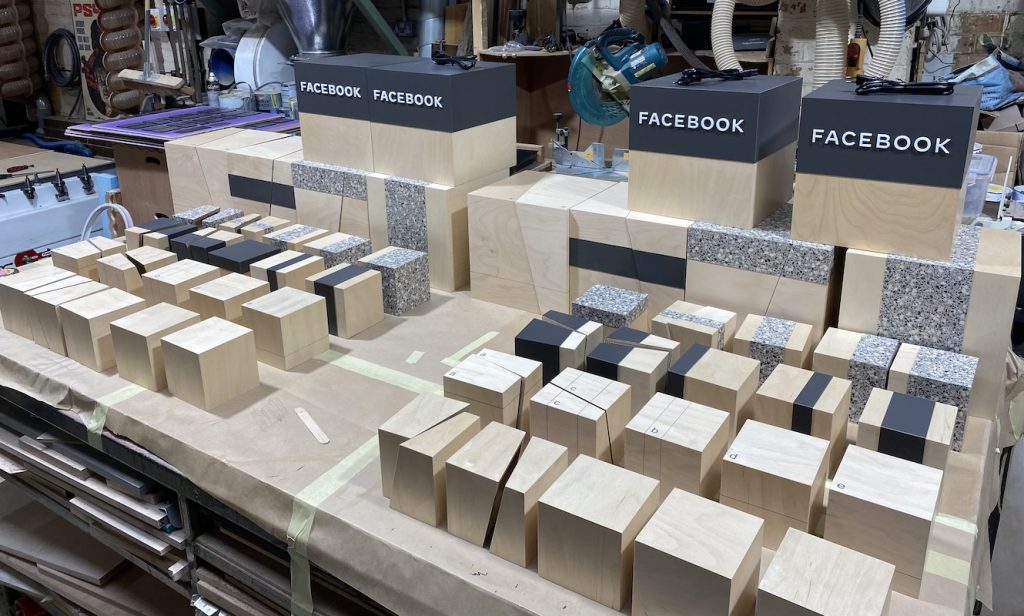 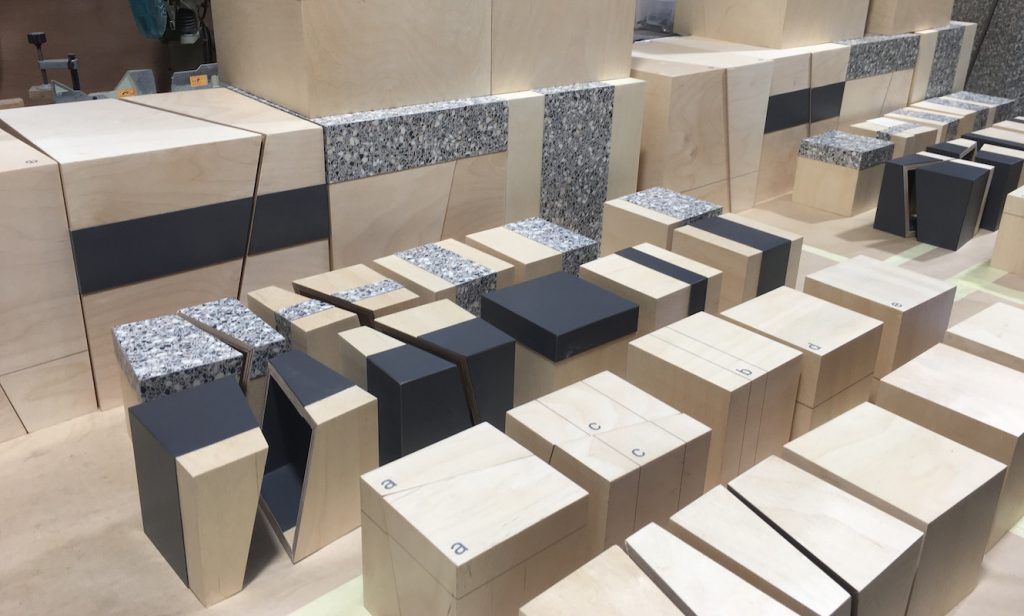 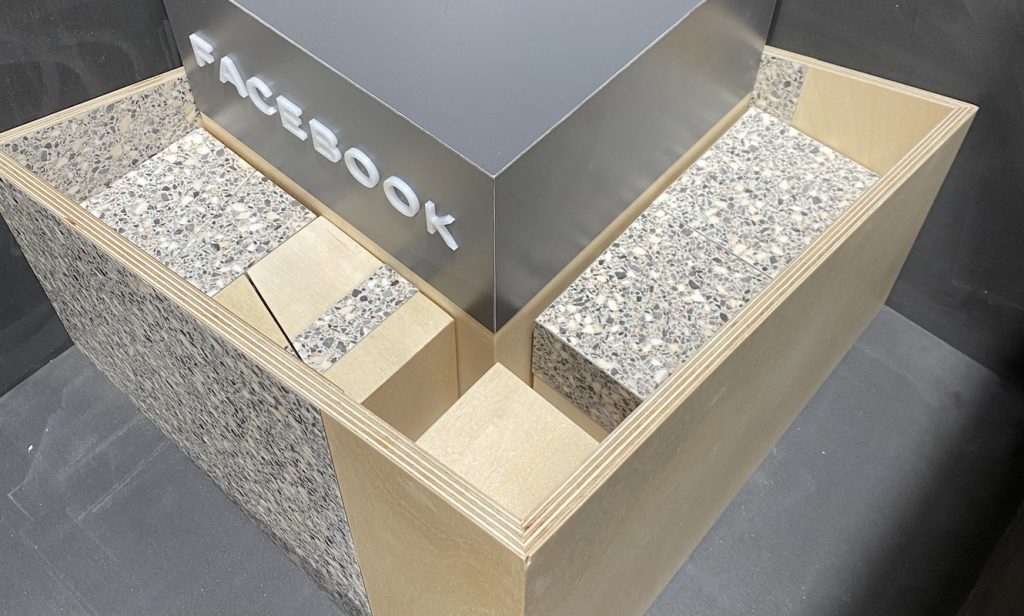